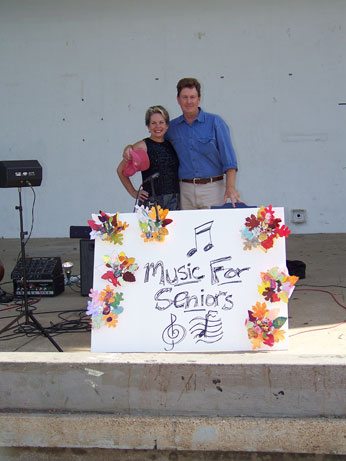 Nashville, Tennessee, known as the music capitol of the United States, truly has music everywhere and for everyone. One organization has aimed to bring music to an often overlooked group of music lovers, seniors. Music For Seniors is a not-for-profit organization that is devoted to enriching the lives of adults  50+ by providing pathways to health, well-being and lifelong learning.

The organization also works closely with Meals on Wheels as they provide home based visits. In these instances the same performer visits the same senior each month, with care taken to match personalities and music preferences.

Other collaborations include partnering with other parts of the community to produce the Music for Seniors FREE Daytime Concert Series have been another exciting aspect of the program’s development. To date, Music For Seniors has worked with Cheekwood, Frist Center for the Visual Arts, Lipscomb University, Metro Parks, Nashville Opera and Nashville Symphony to offer a variety of concerts and other opportunities to participate in live music events across the city.

Music For Seniors is currently in its fifth year as it continues to thrive in the music city. The group has also gained national attention when it was present during the American Health Care Association convention at Opryland Hotel in October, 2008. A video, produced by the AHCA and featured throughout the convention, spotlights Music for Seniors as an innovative program designed to improve the lives of older adults. In addition, in March, 2009, Nashville’s local Fox Television station filmed a news feature story on Music For Seniors.

In 2011, the organization nearly doubled the outreach with 45 participating musicians delivering regularly scheduled music to more than 950 older adults at 50 locations. The musicians gave a total of 558 performances, and June set a record with 71 performances.

Music For Seniors operates independently of Senior Center for the Arts, as an affiliate program of FiftyForward.  Music For Seniors was founded by Sarah Martin McConnell. She received her undergraduate degree from the University of Texas, Austin and her master’s in social work from the University of Tennessee, Nashville. A professional musician, singer and songwriter since 1976, Sarah’s accomplishments include solo performer as well as lead vocalist with various jazz and pop bands, performing in Dallas, Houston, Los Angeles and Nashville. Her national commercial credits as jingle singer and SAG/Aftra actress include spots for What-a-Burger, Western Airlines, Toyota and Opryland U.S.A. Twice featured as a “New Folk Artist” at the Kerrville Folk Festival in Texas, Sarah has been a regular performer with her group, Sarah Martin & Company at the legendary Bluebird Café in Nashville. Sarah’s songwriting credits include: Must I Fall (Walter Hyatt, “Music Town,” Sugar Hill Records) and The Standoff and Reach for Me (Walter Hyatt, “Some Unfinished Business,” King Tears Music). Sarah furnishes distinctive seasonal entertainment to retailers, hotels, corporations and private parties with her costumed trio, The Caroling Troubadours, with their first CD released November, 2005.

You can learn more about Music For Seniors at their official website.

In this article:Music For Seniors, Nashville, Sarah Martin McConnell, Tennessee