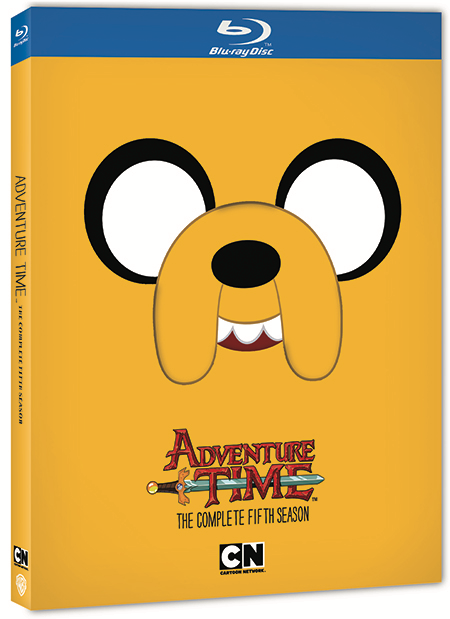 The Blu-Ray and DVD release of “Adventure Time” season 5 has officially debuted and once again it doesn’t let viewers down! The fifth season collection includes all 52 episodes in a custom slipcase featuring everyone’s favorite magical dog Jake, adding to the collectible custom die-cut slipcases from the previous season releases.

I can confidently say that “Adventure Time” has not hit a downslide yet. Every season continues to hold up the insanely witty and clever writing and iconic silliness that the fans love. Season 5 is no different.

Noticeably in season 5, the writers have begun to branch out from the “two different stories per episode” format. A few times through out the season they wrote episodes so they linked up into a more of “monster of the week” format. I personally loved this and found it much more interesting than the regular format and more engaging. (However, I am an adult and maybe their younger audience prefers the quick and to the point stories.)

Season 5 also saw a lot of time spent outside of the homeworld oh which we have spent so much time. Many of the episodes took place in parallel worlds or dimensions allowing the storylines to get even crazier, zanier, and exciting. I have to point out that some of the best episodes of the season where the ones that took place outside of Ooo and in another land/dimension/universe such the pillow-world of “Puhoy” or the fan-fiction world of Fionna and Cake in “Bad Little Boy,” and especially the episodes “Simon & Marcy” and “The Vault.”

Over all, “Adventure Time” season 5 continues to ooze whimsy all over the place. You can’t go wrong with adding this Jake the Dog stylized season to your home DVD or Blu-Ray collection.