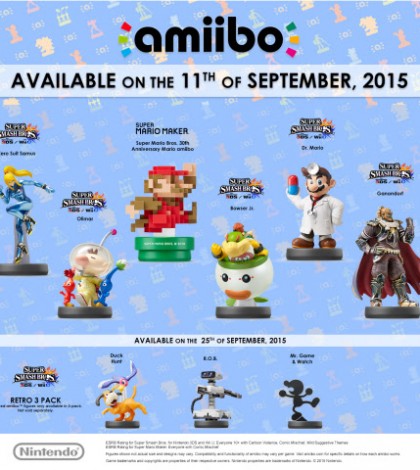 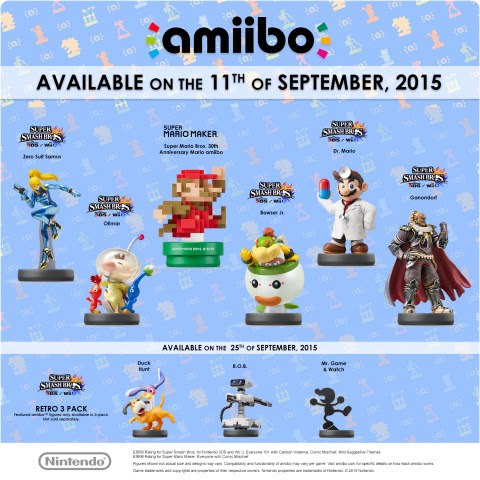 Nintendo’s amiibo line of gaming figurines are all the rage and beginning September 11, an exciting new line is hitting stores. Nintendo is launching a variety of amiibo figures, including many fan-favorite characters from the Super Smash Bros. series and retro gaming characters fans will love.

The amiibo figures launching on the 11th of September feature many fan-favorite characters from the Super Smash Bros. series like Zero Suit Samus, Ganondorf and Bowser Jr. A special Super Mario Bros. 30th series Mario amiibo modeled after Mario’s 8-bit look in the original Super Mario Bros.game will offer compatibility with the Super Mario Maker game for the Wii U console.

The full list of amiibo figures launching on the 11th of September includes:

On Sept. 25, a Retro 3 Pack will launch, which includes R.O.B., Duck Hunt and Mr. Game & Watch amiibo from the Super Smash Bros. series in a single package.

Further details about availability and pre-order schedules for these figures will be announced directly from various retailers in the near future. Three figures based on Mii Fighters, which were previously announced for release in September, will now launch as a 3 pack in November. More information about launch plans for the 30th Anniversary Mario Modern Color amiibo in North America will be shared in the future.