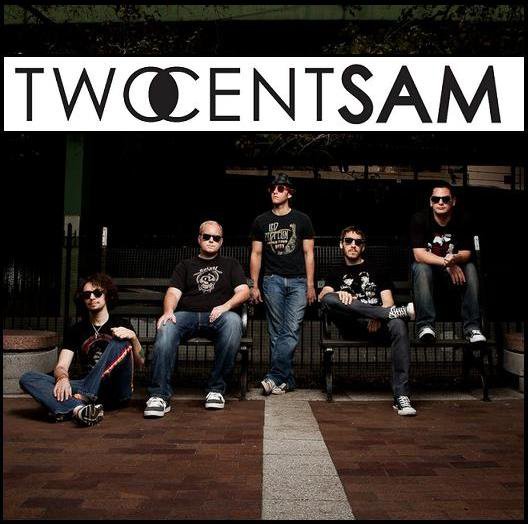 I have found a new favorite band: Two Cent Sam. If you haven’t heard the New York rock band, you are missing out.  TCS was formed in 2009 and has since gained incredible momentum in the music industry.

In early 2009, shortly after forming, they created their first EP called “Give and Take World” successfully pushing them into NYC music scene. TCS later entered The Hard Rock Battle of the Bands and subsequently won granting them a show at the infamous Hard Rock Cafe in Times Square.  The band has only been moving uphill from there.

In August 2011, they released their first full-length album called Songs from the Sandbox.

I safely say, right from the beginning, Songs from the Sandbox is a fantastic album. I received the day I left for a two-day music festival and I listened to it the entire trip there and back. The car test is one of the first things I do when listening to a new album. Will this music entertain me while I drive around or will it make me want to switch it off? In the case of TCS, I haven’t taken the album out of the car since last week. I listen to it everywhere I go.

The album starts off incredibly strong. “War Cry” the first song is one of the best on the entire album, but don’t get me wrong, the rest of the songs keep the energy going created by the first song. I also have to admit I had the song stuck in my head for a few hours.

“Cowboy Rock N Roll Awesome Song” and “Never Too Soon” were two songs that I often found myself repeating multiple times in the car and on my iTunes playlist.

I love this album for many reasons but on top of it all is the sound. The band, TCS, has a great sound together. Lyrics aside, the music is memorable and captivating. No two songs are alike and each one is marvelous.

You can listen Two Cent Sam on their official website and see their awesomeness for yourself.

Also, it helps that the band is full of hunky men. I could look at them all day. 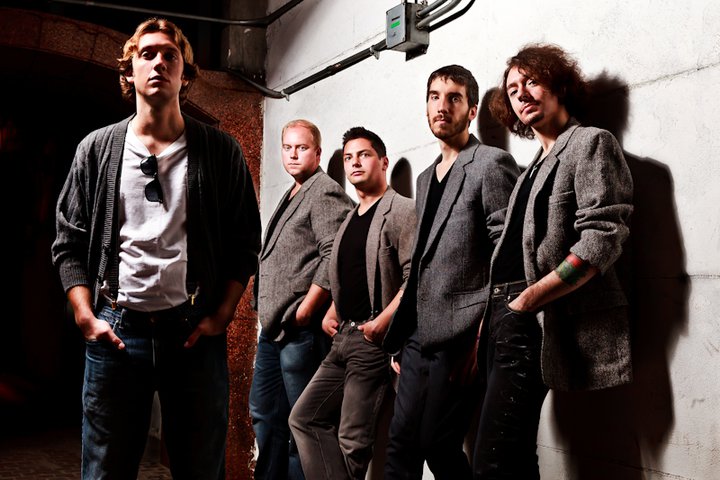 I was lucky enough to also get an interview with Two Cent Sam.

Where does your band name come from?

The band was looking for a name which is though now that you can Google everything so we didn’t want something someone else was using. Matt finally came up with the name out of nowhere and we all thought it was a fine title for what we we’re doing and then sealed the deal when no one else had it.

Do the songs on your albums have an overall theme or are each more of a standalone song?

The first EP their all stand alone.  On ‘Songs from the Sandbox’, our full length, some of the songs are grouped into themes because they go well together but it’s not a concept album.

Does one member do the majority of the songwriting or is it more of a team effort?

Mike writes the songs and the first two records were a lot of back logged tunes and things he came up with during his time overseas so he’s the overall writer and continues to be. Going forward we’re looking at more of a collaborative process for our third release now that we have things going for over selves we’re going to take more time on the next record.

Who were your greatest inspirations growing up?

Musically everyone in this band is influenced by different things, so that would be five different answers; we’d like to refer you to twocentsam.com where our bio page answers this question very well.

If you could open for any act, who would it be and why?

I would say The Strokes because that would mean their doing live performances again but we’d be open to anyone who’s following is greater than ours.

Do you have any advice for bands still trying to get their name out there?

Don’t give anybody money for anything, write better songs and enjoy the live performance side of being in a band.

I listened to several of your songs and loved them. Are there any plans to tour in the near future?  Maybe to my city of Nashville, TN?

The band would love to come on down to Nashville, If you put us up we’ll be there next week, deal?

Deal! I’d set that up in a second!

In this article:Interview, Songs from the Sandbox, Two Cent Sam