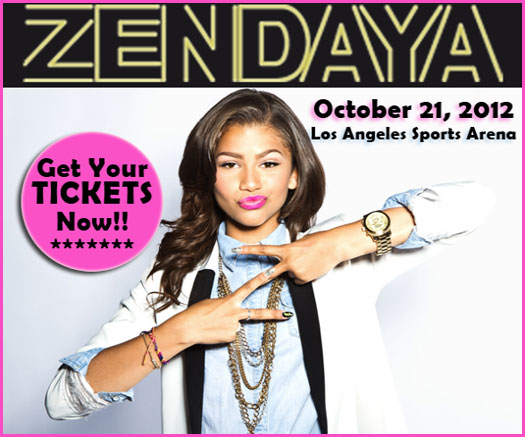 Actress and singer, Zendaya Coleman, has announced that she will be performing at the Los Angeles Sports Arena of October 21, 2012. The show will be a benefit concert for Operation Smile, an organization that helps treat children born with cleft lips and cleft palates.

Heya everyone! Just wanted to let you all know that I will be performing at the the Los Angeles Sports Arena on October 21st! This event is a benefit concert for the amazing charity, Operation Smile

Zendaya Coleman is most known for her role as Rocky Blue on Disney’s “Shake It Up.” She has also released several singles as well as done several musical performances. In 2009 Zendaya did a cover of the Katy Perry song “Hot n Cold” on Kidz Bop. Zendaya’s first single was a song called “Swag It Out,” released online through iTunes and Amazon. The official music video for the song was released on YouTube on December 15, 2011.

She performed “Swag It Out,” “Something to Dance For,” and “My All” at the White House. In 2012 she released “Fashion Is My Kryptonite” on iTunes. On September 2, 2012 it was announced that Zendaya will be on Disney Channel Holiday Playlist singing “Shake Santa Shake.” On Zendaya’s sweet 16 she performed two new songs from her upcoming album: “My All,” and a remix of Justin Bieber’s song “Boyfriend,” titled “Girlfriend.”

In this article:Operation Smile, Zendaya Coleman