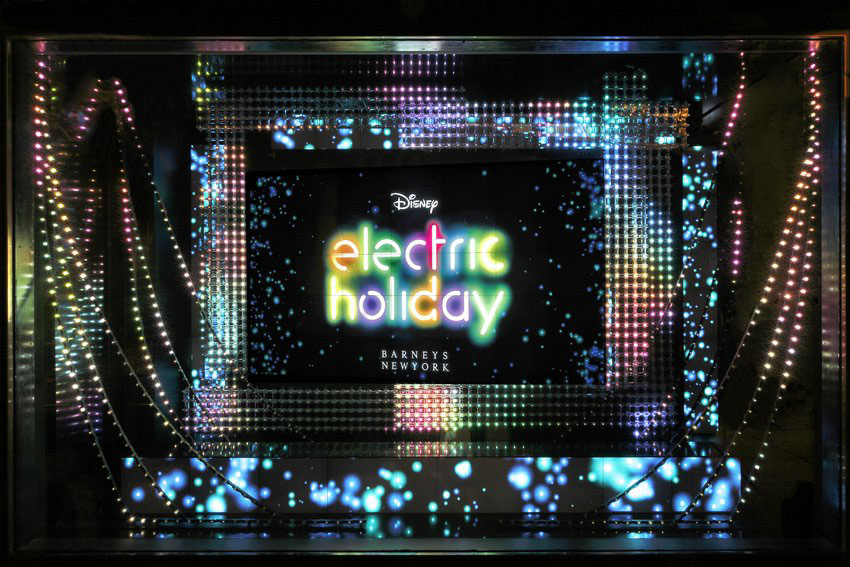 The luxury retailer, Barneys New York, is partnering with The Walt Disney Company and have launched the 2012 Holiday project Electric Holiday at the Barneys New York Madison Avenue flagship store. The initiative infuses fashion with fantasy while merging the  creativity and magic of Disney with the wit and surprise of the legendary Barneys New York annual holiday project to create a celebration of festive modern electric lights, music and fashion.

As a part of the Electric Holiday program, 25% of sales from the limited-edition Electric Holiday product collection sold at select Barneys stores and Barneys.com will be donated to the American Red Cross. This is in addition to the $2 million dollars The Walt Disney Company has already pledged to support relief efforts, including $1 million to the Red Cross for immediate relief and an additional $1 million to support rebuilding efforts in Hurricane Sandy affected communities.

In addition to donating part of the proceeds, Disney/ABC Television Group organized a national “Day of Giving” on Nov 6 2012, seamlessly integrating outreach messaging across various programming and raising more than $18 million dollars for the American Red Cross.

“Disney is proud to be part of New York’s holiday magic this year. Together with Barneys, we’ve created a one-of-a-kind experience that combines Disney’s great characters and storytelling with high fashion for a spectacular celebration of the season.”

The holiday windows that will accompany the program were unveiled featuring  ‘Electric Holiday’, a moving art video starring Minnie Mouse on a fun, fabulous fashion adventure in Paris, along with an array of notable fashion personalities and Disney characters.

“Disney is a magical brand and Barneys New York is a surprising brand.  We feel we’ve captured both the magic and the surprise with this holiday project. It has been a dream to collaborate with Disney and we at Barneys are grateful that they found it intriguing to mix characters from our different worlds in this way.”

The moving art video was conceived to be a playful interpretation of the high fashion world, and will screen for a six-week period in the Madison Avenue windows, as well as in Barneys flagship stores across the country. To help bring the show to life, Oscar®-winning composer Michael Giacchino has created an original score. The video is exclusively on barneys.com, Disney.com and AOL.com.

Fashion personalities featured within the moving art video include:

Each Disney character is dressed in a one-of-a-kind exclusive look created by some of the most influential fashion designers in the world, including:

In addition to the Electric Holiday product assortment, there will also be a curated selection of vintage memorabilia available at the Madison Avenue flagship location, including a vintage Mickey watch, a signed biography of Walt Disney and specialty vintage Disney toys.

The Electric Holiday moving art video will be displayed in all Barneys New York flagship markets including Beverly Hills, Chicago, San Francisco, Boston, Scottsdale, Dallas and Seattle, as well as on Barneys.com and its luxury content site, The Window.