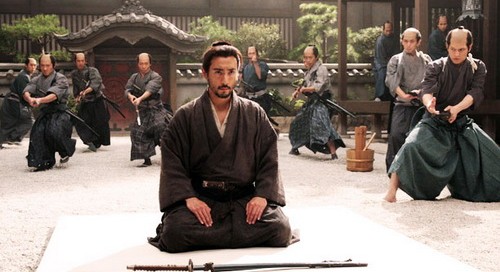 Hara-kiri: the Death of a Samurai (subtitled in English) played as a special presentation of the New Orleans Film Festival, so I got to see it on a big screen, but it is also available to rent on demand from Amazon.  For those of you who may not know Takashi Miike by name, his films include Audition, 13 Assassins, and Sukiyaki Western Django—to name only a very few of his catalog of films.  His work has a dark edge to it, whether it is dark comedy or full-on torture horror.  Hara-kiri is a much more serious work than I have seen from him (though I have by no means seen all his films).  It is a dramatic tragedy with truly horrific elements—horrific not because they are the standard over-the-top horror features but rather because they are realistic and more terrible because of their very plausibility.

The film opens with an old samurai coming to the house of a great lord and asking to commit ritual suicide in its court.  The head retainer asks to tell him the story of the last samurai who asked that boon, and so we flash back to what happened months before when the same request was made of that house.

I won’t say more about the plot, to avoid spoilers.  Instead I want to talk about what this film does best, and that is to make you feel on a very primal level the tragedies experienced by the characters.  There are multiple instances of hara-kiri in the film (not a spoiler, look at the title), and one of them is agonizingly intense.  It is long and drawn out but not really all that gory or graphic in terms of blood and entrails.  It is almost sterile in its lack of blood, but more effective for that restraint.  My stomach heaved watching it, because I was so in that moment with the character; the way it was filmed and acted, the empathy I had for him, the emotions I felt from him, made me imagine doing that to myself.  It was amazingly effective, enough so that later scenes of hara-kiri that take only moments make those guys look almost weak in comparison.  Anything that makes committing ritual suicide look easy is goddamned intense, to say the least.

Be prepared for that scene if you watch it—and you’ll know it’s coming.  The point here is not to be surprised that events happen, but rather to revel in the feelings those events evoke as if they were your own.  A scene of intense grief over a death later on made this clear to me: the point of the scene is not the death itself, as an event, but rather the experience of grief the death causes the characters.  The camera lingers on the wails and cries of the bereaved, for far longer than is necessary to show the plot points of death, profound grief.  The lingering is therefore intentional—the grief is the point.

Thematically, the movie takes a look at what honor is, and what it means to live–or die–by one’s honor.  The culture (feudal Japan) is almost alien to modern Western sensibilities, but the film contextualizes every action and belief of the characters so that, viewed through the lens of that culture, the decisions that seem horrifically impossible for us become natural, logical, honorable…inevitable.

Visually this movie is stunning. Miike’s artistry is on full display on pretty much every technical level of this film.  It is beautiful to look at, it is superbly framed, the editing and pacing are perfect for the almost hypnotic effect he wants to achieve–the train wreck in slow motion that you know is going to end badly but you cannot stop watching because it is so beautiful. The sword-fight at the end is among the best I’ve ever seen.  Breathtaking.  Sweeping and exciting and creative and pulsing with an edge of danger because we know how very vulnerable the hero is due to his choice of weapons and the standard of honor and courage he now has to live up to.

The movie is in 3-D, but it is very artistic 3-D.  I can’t recall any moment of an “expected” effect, with something coming toward the camera.  Instead it was used to create depth and to deepen your sense of being part of the story.  It intensifies the hyper-realism of the film.  Normally I hate 3-D, but I would recommend seeing this film in 3-D if you have the option.

And I do recommend this film, so highly, if you are the right audience for it.  The movie is serious, intense, and visceral. It’s not for the weak of stomach or those of you who need a movie to have a happy ending.  The ending here is satisfying, but it is in the tradition of grand tragedies–the main character attains a catharsis to close the story, but his ability to attain happiness had been destroyed before the story began.  But if you like that sort of thing…this film is a masterpiece. 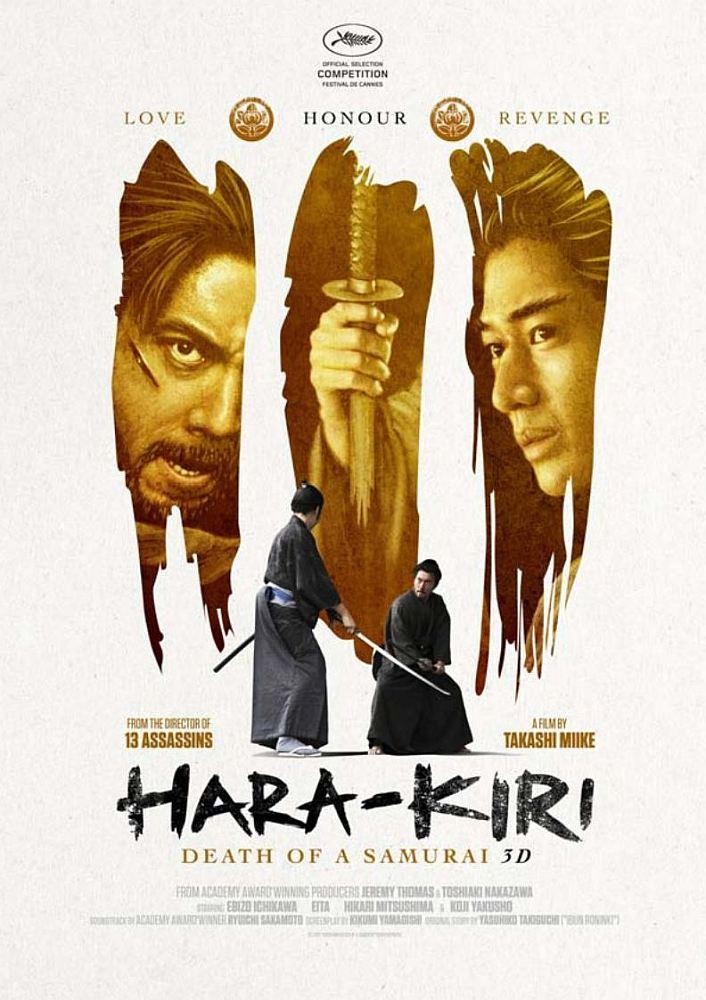 In this article:Hara-kiri: the Death of a Samurai, Takashi Miike