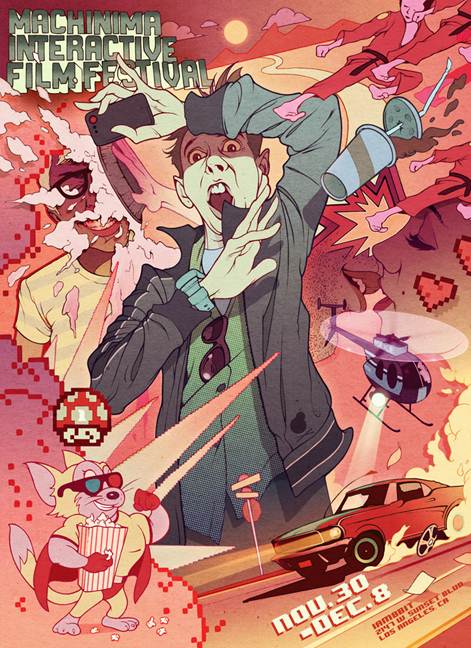 The number one global video entertainment network, Machinima, has announced the first ever Machinima Interactive Film Festival, a nine day online and offline exhibit, which shines a light on the hard working filmmakers and animators at the forefront of this unprecedented cultural shift in online video media.

Beginning November 30th and continueing through December 8th, the Machinima Interactive Film Festival (or MIFF as it’s fondly referred to) is a massive collaboration between Machinima, iam8bit, and some of the best and brightest filmmakers and animators on YouTube.

iam8bit will be exhibiting the entire entertainment experience at their Los Angeles studios throughout that week, while Machinima promotes the content online via the official website that will become the main hub page for the festival and its content starting December 1.

The online element of the festival will include a fan voter generated experience that will allow anyone to vote on their favorite piece of MIFF content throughout the week. Voting using the hashtag #MIFF will enter voters into a contest for a chance to win one of three HP workstations (approximately $5k value each) or a 12-month Adobe Cloud membership (approximately $600 value), courtesy of the new film “Waiting for Lightning” (available in theaters and for download on December 7). The winner will be announced on December 14.

“YouTube has exploded with talent over the last few years and Machinima has been fortunate enough to be right there with it, forging new paths and being a part of the birth of a new interactive media experience. Our audience is some of the most engaged and influential minds out there, and we’re excited to present them with a whole new way of experiencing and interacting with content.”

The content will be presented in 6 different categories, including:

“There is a parallel between what’s happening in the art world and what’s happening in the online video space. What we generally consider “street art” and pop culture-inspired works of expression are exactly what these talented young online filmmakers are creating.” He continued stating “some of the most innovative young creators and animators can be found on YouTube, and they are making a name for themselves right now, evolving into what could be the next David Fincher, Seth MacFarlane or Joss Whedon. The unique gallery-style presentation combined with the shareable nature of the event allows a whole new experience for these creators to express their art and the audience to engage with it.”