Dead Man’s Burden (written and directed by Jared Moshe) was one of my favorite films from this year’s New Orleans Film Festival.  It’s an excellent Western—beautifully filmed, tightly constructed, simple and big at the same time thematically, and ambiguous and brutal morally. The film intrigued me in the first thirty seconds, with an opening tableau of a pretty young woman shooting a man off his horse. It hooked me when she followed it up with a killshot at close range…with the same rifle.

The film follows Wade McCurry, estranged from his family and presumed dead by all of them, as he returns to the family’s New Mexico homestead after receiving a cryptic letter from his now-dead father.  Wade reunites with his little sister while butting heads with her new husband.  A representative from a large mining company is seeking to buy them out, and the only person who seems to regret Wade’s father’s death is the crazy old man across the valley.

Love, trust, suspicion, betrayal, murder…all the elements you need for a good Western.  I can’t even call the story a revenge story, because it’s not; it’s about the lengths humans will go to to save what they love or to save themselves.

The film is a slow burn, but it’s pretty fat-free. Every scene was well placed and necessary–I can’t think of anything that could have been cut to make this film any tighter.  The content editing was spot on, getting only what was necessary to tell the story with maximum punch, where any addition or subtraction would mean diminishment.  The acting was also great (which is always worth noting with an independent film).

I cannot stress enough how lovely this film is, visually speaking.  The wide vistas of the American West are certainly showcased, but so are some of the less obvious natural beauties such as a yellow cottonwood forest.  The sequence that takes place in it lingers in my mind because the light filtering through the leaves was just so dreamlike—it captured on film a setting I have experienced but never been able to capture with my camera.

Barlow Jacobs, who played Wade, attended the screening I went to and gave a quick question and answer session afterward.  He shared that the movie had been filmed in 18 days, because they were shooting on celluloid film rather than digital.  This meant, he told us, that they didn’t always have time for multiple takes—either they had to get it right in one, or they were unable to play with alternative ideas because the first one was good enough and they didn’t have film to squander on variations.  I asked why the director chose to use film, and he said it was specifically to capture a visual look that digital just doesn’t have.  “Even film’s like The Proposition” (which I adore, so he got big points with me for referencing it) “have a certain flatness to them, because that’s how digital shoots.”

Dead Man’s Burden has been picked up for distribution, so hopefully sometime in late winter or spring it will be hitting a theater near you.  If you like Westerns or have a celluloid fetish, this film is not to be missed.  It will satisfy both cravings. 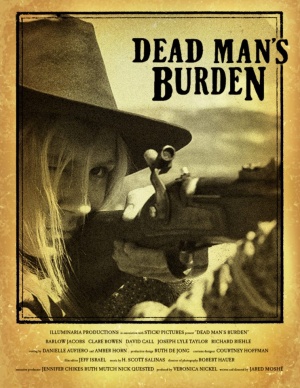 Full disclosure: I am one of the initial screeners for the NOFF. I do not judge the films in competition, but I do help recommend the films that play.  I may or may not have screened the films reviewed in the segment prior to their selection by the festival committee.