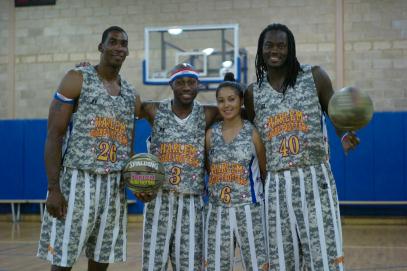 World famous basketball team, The Harlem Globetrotters announced yesterday that they would once again embark on an extended holiday tour of global U.S. military bases. This year’s holiday tour is the eleventh time in nine years that the  “Ambassadors of Goodwill”™ have entertained U.S. troops overseas.

The tour features ten games which are set to begin after Thanksgiving. Their first stop is in Afghanistan (for the first time), marking 121 countries and territories in which the Globetrotters have performed in their illustrious history.

This globetrotting event is put on by Navy Entertainment and Armed Forces Entertainment. It will also feature shows on U.S. military bases in Kuwait, Bahrain, Djibouti, and the United Arab Emirates, as well as a performance on an active-duty U.S. aircraft carrier.

“While there is no way to fully express our admiration of the U.S. Armed Forces, it’s an incredible honor for our players to bring the troops a little piece of home, especially at this time of the year. Without the sacrifices made daily by these brave men and women, the Harlem Globetrotters would not have the opportunity to bring joy to families all over the world.”

The Globetrotters’ 2013 “You Write the Rules” North American Tour tips off Dec. 26.

In this article:Ambassadors of Goodwill, Harlam Globetrotters, You Write the Rules