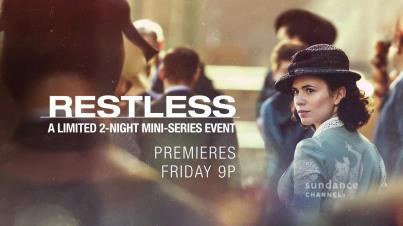 It was announced today that Charlotte Rampling has been nominated for a Screen Actors Guild Award for her performance in Sundance Channel’s critically-acclaimed original miniseries, “Restless.” The nomination sits in the category of Outstanding Performance by a Female Actor in a Television Movie or Miniseries.

The two-part miniseries (the second installment will air Friday, December 14th at 9 PM  et/pt), directed by Edward Hall and penned by celebrated novelist William Boyd based on his novel of the same name, tells the thrilling story of a daughter who discovers that her mother was recruited as a spy during World War II.

“‘Restless’ featured a dream cast made up of some of our industry’s finest talent,” said Sarah Barnett, Sundance Channel Executive VP and GM. “We congratulate Charlotte on her incredible performance and are so proud that her work has been recognized by the distinguished Screen Actors Guild.”

The miniseries first premiered in the US in early December 2012. “Restless” is made by Endor Productions in association with Sundance Channel for BBC One. The series is produced by Hilary Bevan Jones and Paul Frift for Endor and Executive Producers are William Boyd with Matthew Read for BBC and Christian Vesper for Sundance Channel.

“The 19th Annual Screen Actors Guild Awards®” will be presented on Sunday, January 27, 2013 in Los Angeles.

In this article:Charlotte Rampling, Restless, Sundance, The Sundance Channel