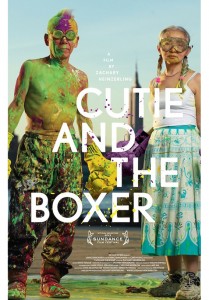 FULL DISCLOSURE: There are two reasons I am glad CUTIE AND THE BOXER is such a great film: 1) I wanted to spend my time at Sundance watching good movies, and 2) it could have led to awkward dinner conversation, as I was serendipitously rooming with several of the film’s producers during my stay in Park City, UT.

CUTIE AND THE BOXER tells the story of the Shinoharas – a Japanese couple based in New York City whose unique art and personalities rival the depth and complexity of their 40-year marriage.  Director Zachary Heinzerling discovers two very rich subjects in Ushio and Noriko Shinohara, and he graciously shares their wealth with finely-tuned finesse and judicious storytelling.

Ushio moved from Tokyo to New York City in 1969 to continue his momentous career as an artist and expand on the fame and accolades he enjoyed in Japan.  Three years later, he met the 19 year-old Noriko who was less than half his age.  They quickly married and Noriko became pregnant with their son, Alex.  Thus began Noriko’s willful yet begrudging servitude to Ushio’s art at the expense of her own artistic talents and desires.

Ushio’s distinctive “boxing” paintings mesmerize audiences in both their kinetic creation and subsequent well-deserved state of recovery.  From countless boxing canvases to suitcases bursting with sculptures, Noriko serves as assistant, caregiver, wife, mother, and neglected artist.  In response to the near extinction of her once promising art career, Noriko conjures Cutie, a cartoon-like character whose voice is defiant and strong in the face of Ushio and manifests itself in beautiful drawings.

The heart of CUTIE AND THE BOXER is the simultaneous struggle, love, resentment, and pure artistic pleasure shared between Ushio and Noriko.  In Cutie, Heinzering leverages Noriko’s resurgent artistry by incorporating the character (along with her husband, the aptly named Bullie) into the narrative of the film.  Through Cutie’s voice we learn of the Shinohara’s past – including Ushio’s disruptive affair with alcohol – as well as Noriko’s stylized version of Cutie and Bullie’s future. 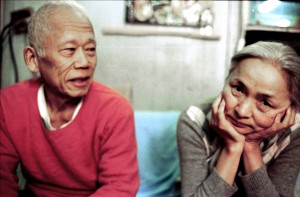 The Shinohara’s dark humor lightens the often tense moments of the still struggling artists’ lives.  In one instance, Ushio explains how the less talented one needs to support the real artist in the family.  Despite that sentiment, the film culminates with a joint gallery exhibition featuring Ushio’s sculptures and paintings and Noriko’s installation of Cutie vignettes whose willingness to explore the spectrum of marriage becomes a central voice in the film.

Although a documentary, the footage Heinzerling shot over the 1-2 years of filming, in addition to archival home video and broadcast tapes, allowed the director creative freedom resulting in a more narrative-style film.  But it is the relationship Heinzerling forms with the Shinoharas over the film’s 5 year production period (including living in their home to film various sequences) that serves as the quintessential factor in CUTIE AND THE BOXER’s success.  The rapport between the Shinoharas and the filmmaking crew is so close the viewer may forget the two individuals, so open with their emotions and desires, are completely unencumbered by a camera that has become a part of their lives.  The result is Zachary Heinzerling’s directorial début, earning him the 2013 Sundance Film Festival’s Directing Award in the U.S. Documentary category.  Not a bad start.

One final note: I cannot think of a more satisfying, playful and serene chaos that has commanded a screen during a film’s closing credits.  Hint: Ushio and Noriko are not afraid to get their gloves dirty. 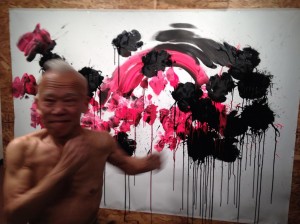 Ushio, posing for the camera after completing his latest boxing painting following the film’s World Premiere at Sundance.  The performance was standing-room only.