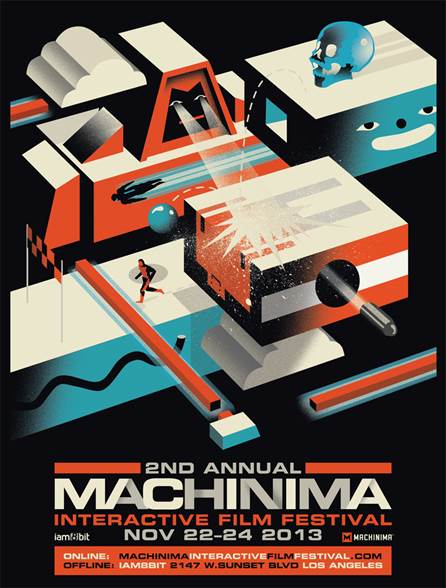 The second annual Machinima Interactive Film Festival (MIFF) is almost here. The event will be held at iam8bit studios located in Echo Park. Running from November 22 – 24, 2013, the offline exhibit will shine a light on filmmakers and animators at the forefront of this unprecedented cultural shift in online video media.

The video art show is unique in its ability to provide anyone in the world the opportunity to view work submitted by some of the most talented online video directors and content creators. With just over one week to go before this year’s festival, some of the entries come from all over the world, and feature talent from YouTube, Vimeo, top animation and film schools, traditional festivals, and even a few Hollywood insiders.

Unlike traditional film festivals, “MIFF” breaks down barriers of exclusivity and expense by asking for no entry charge, no scurry for tickets, no stress— for both its online and offline components. In addition to the offline event, “MIFF” is a massive, yearlong collaboration between Machinima, iam8bit, and some of the best and brightest filmmakers and animators around, empowering directors and content creators to develop their best work and submit it to the event. So far, Machinima has uploaded over 30 pieces of content, as the piloting stage is year-round. Those videos alone have generated an average of 100K views per video, curating over 3.5MM views. In addition, last year’s winners have collectively accumulated more than 10M views on their respective shows and series.

For the first time ever, three creators (one from each category) will be selected as winners and given development deals for a three-to-four episode mini-series to be funded and distributed by Machinima. Of the three mini-series, one will be selected to develop a feature-length (90 minute) piece of content, distributed as nine 10-minute segments on Machinima, as well as potential limited theatrical distribution.

The content will be submitted and presented in 3 categories, including:

An ongoing celebration of incubating creative talent, accepted selections will be distributed online by the Machinima network and housed and promoted via MachinimaInteractiveFilmFestival.com. iam8bit will then physically exhibit the whole entertainment experience at their studios in Los Angeles from November 22 – 24, 2013.

Machinima is the number one global video entertainment network for young males. One of the top entertainment networks on YouTube, Machinima serves over 2.1 billion video views per month, and reaches over 188 million viewers monthly. The network features scripted series, original content, weekly and daily shows, official publisher content, and gameplay videos, all aimed at the coveted 18-34 year old male demographic.