The band was initially formed by Kell and Lickenbrock. The friends met while in high school where they would later connect as members of their school’s band’s drumline. Despite ups and downs over the years and a falling out that almost lasted forever, several years later Great Isaac was reformed. A new sound was created with the reconstructed band, albeit something a bit different from what they had originally anticipated.

The funny thing is that we wanted to be an experimental/ psychedelic rock band! After jamming out a few times, he asked me to play something else that I’ve written (other than the shit we were trying to play), and I played a song that would later turn into a Great Isaac Song.

The rest of the band members would join through a series of factors that seemed like fate. A well placed bar they all frequent and the merging of small musical projects would all lead up to the creation of Great Isaac.

Jeremy Theel, our bass player, actually asked me and our piano player, Nick Ebeling, to start a band first! I played drums, Nick sang, Jeremy played guitar, and Jeremy’s cousin played bass. It was kind of like a Funk Rock band, but for some weird reason we covered Magic Dance by David Bowie…yes, the song from the movie Labyrinth. One day at practice, I heard Nick play the piano and he blew me away! I had no idea that he played the piano! We had to take a break from practicing, because we needed to find a new practice space. That’s when I recruited Nick. Later on, Jeremy found out what we were up to and asked if we needed a bass player.

Great Isaac may just be a name to some, but for the band, it embodies everything they wanted to be and the direction they were going to take it. According to Lickenbrock, the band is named after Great Isaac Cay, a small Bahamian island located about 20 miles from the Bimini Islands. Currently, the island is abandoned save for a lighthouse and a few buildings. What captured their attention was the idea that the island was inherently peculiar and maybe a little bit haunted.

I felt like the location really reflected the direction that I wanted to take the band. The island is rather mysterious and dark, but there’s something beautiful about it. It’s surrounded by the ocean and the only way to get there is by boat. Our band’s music has some pretty dark and mysterious lyrics, but it’s sung over pretty music. It just made sense! We chose Great Isaac and never looked back.

Great Isaac’s hauntingly beautiful and organically dark lyrics partnered with upbeat tempo and music has led to the band’s comparison to other bands such as Neutral Milk Hotel,  Mumford and Sons, The Good Life, and Arcade Fire. However, their musical inspirations are diverse and widespread through the genres. Lickenbrock describes his process of writing music as if he was creating a musical tale.

Sometimes, life events inspire me to write a song. However, most of the time, I like to be creative and make up a story. Then, I take that story and  turn it into a piece of music.

Their recent release, a self titled album reflects the band as they first started out to where they are now. The album can be looked at a journey for Great Isaac. Starting with their first foray into playing together and getting the hang of each others musical style. Ending with the last two songs they wrote, “Beginning to End” and “Twelve Hundred Degrees,” listeners can experience the same musical odyssey that the band themselves went through while creating the album. Furthermore, the album is the result of a band that both writes together and separately.

Our song writing process is a combination of the two. I’ll usually write the barebones version of the song, bring it into practice, and we’ll arrange the music together. I like to work as a team whenever possible.  Sharing creative input and bouncing ideas off each other tends to give us great results.

What sets this band apart from the others is partly their unique sound. Lickenbrock explains that without Wilson, the banjo player, Great Isaac might as well be just another rock band. However, by utilizing Wilson’s traditional folk and bluegrass playing abilities, the resulting product is one that is not easily replicated or copied. It also helps that they are humble in regards to the band and how they fit into the local music scene.

That’s actually a pretty hard question! We don’t really like to compare ourselves to other bands! I would say that we have a pretty interesting sound. I play with 4 extremely talented musicians that come from different musical backgrounds.  We utilize everyone and try our best to create the fullest sound we can.

In the end, Great Isaac would be satisfied to play more shows for more people and make music that their fans enjoy. They didn’t speak of fame and fortune, but mostly of spreading their sound and doing what they love.

To be honest, I want us to be more involved here in the St. Louis music scene. We have a really good music community here and I want Great Isaac to be more well-known here. We’ve opened up for a handful of touring bands, but I want to focus more on local shows.  After that, maybe we’ll go on some mini-tours! 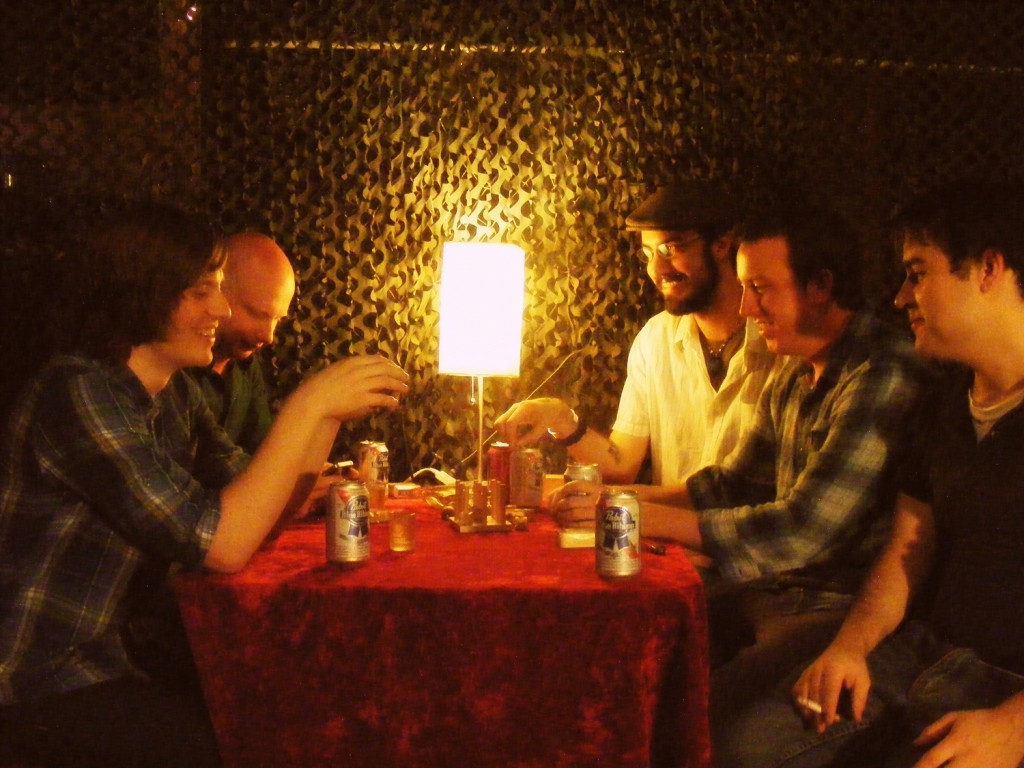 The first song on the album, “Send Off” may only be 47 second long, but the stirring and emotional track will immediately attract your attention. Like the island it get it’s name, the track produces and ethereal and haunting sound. It sits in stark contrast to most of the album and its upbeat rhythms yet it works to the band’s advantage.

The album immediately transitions into “C.K.” and then “Train Song” which are both catchy and folky singles that display the wide talent of the musicians.

Steven Lickenbrock shines as the vocalist as he displays a wide range of powerful ability. Nick Ebeling on piano adds a missing piece that is both impressive and lovely. His skills are beautifully showcased on the track “The Hunt.” The instrumental track does best at evoking intense imagery and feelings without requiring lyrical accompaniment. The talent and skill of the rest of the band is fully harnessed to a point where it is hard imagine the band without them.

The entire album seamlessly flows from song to song without any awkward pauses or breaks. It is easy to get absorbed by the music and have the time fly by before you even realize it.