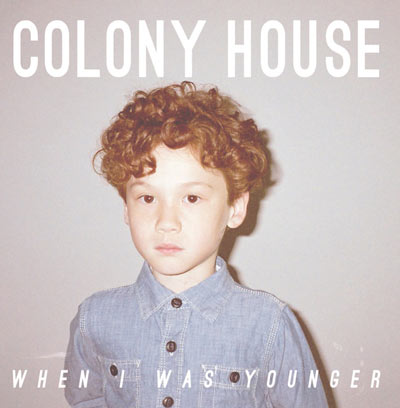 At 2015’s Hangout Festival, Nashville band Colony House performed, spreading their unique and distinctive sound. Despite all the talent in the music city, this band and their talents stand out. Comprised of Caleb Chapman, Will Chapman, and Scott Mills, the trio have an undeniable gift that can be heard through every song on their debut album, When I Was Young.

The album, according to the band, was years in the making.

“Process on this one was interesting because the songs were around longer than usual. Some of them were written years before the album, some were written during the process of recording the album… we all collaborate to create a Colony House song.”

Their personal touches are apparent throughout every lyric on every song. That is what makes Colony House a band for the ages. They don’t write about what they think their fans want to hear or cater to the masses, instead write about real moments and real life. Every emotion can be felt through the lyrics of their songs in a way that most artists struggle to convey.

“We are very much life observers. The songs are based on personal experiences or experiences of family, friends, and those around us.”

The first single from When I Was Young has been getting a lot of play around the country. The track, titled “Silhouettes” is an anthem for making it through the hard times, a reminder that the rough moments won’t last forever. Colony House explains,

“The goal with all songs or lyrics is to make something personal transcend and connect with the audience and make it personal for them. “Silhouettes” is really about walking through those dark times and how it doesn’t overshadow the good things.”

The band made their television debut on September 29, 2014 on NBC’s “Late Night with Seth Meyers.” The band spoke about how amazing that experience was for them and how even after hundreds of shows, they still get stage fright.

“It was trippy. Really crazy. There was a lot of build up for a short amount of time. It was like playing the championship baseball game. You know, it is like you’ve played this game a million times but once you get up there you realize it is not that hard. It was surreal, definitely.”

Society is lucky these musicians found each other and formed Colony House because otherwise we would have totally different people among us. When asked what their alternative careers would be, the world could have ended up with a chef, video production-ist, entrepreneur/innovator, and a carpenter!

You can buy the debut album from Colony House, When I Was Young on iTunes now or watch the video for “Silhouettes” below!

In this article:Colony House, Hangout Fest 2015, Interview, When I Was Younger