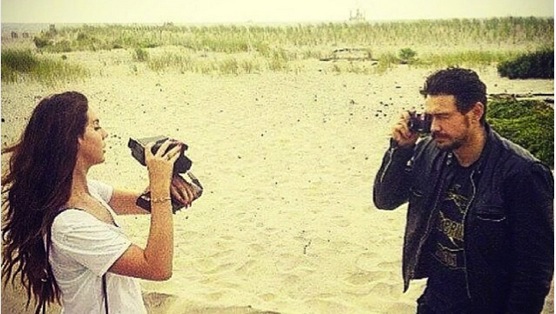 James Franco has told us repeatedly that he is a literary guy even though we repeatedly tell him “yeahhhhh sure.” But in reality he has published short stories and screenplays not to mention adapting iconic classic novels into films. Recently he took his prowess a step further as he teamed up with New York Times bestselling author David Shields to write a book about singer Lana Del Rey, called Flip Side: Real and Imaginary Conversations With Lana Del Rey.

Franco was once Shields student while he was working towards his  creative writing MFA through the Warren Wilson Program, and the two also co-wrote and directed the film adaptation for I Think You’re Totally Wrong: A Quarrel.

The actor has previously alluded to the book back in January when he wrote a tribute to his pop star friend and apparent muse in V Magazine called “Shades of Cool.” In the end of the ode, he added, “I wanted to interview Lana for a book and she said, ‘Just write around me; it’s better if it’s not my own words. It’s almost better if you don’t get me exactly, but try.’” According to Rolling Stone, the mention turned into a 100 page book to be released next year via Penguin Random House.

“Lana has become my friend. She is a musician who is a poet and a video artist. She grew up on the East Coast but she is an artist of the West Coast,” Franco wrote in Vof the Born to Die songstress. “When I watch her stuff, when I listen to her stuff, I am reminded of everything I love about Los Angeles. I am sucked into a long gallery of Los Angeles cult figurines, and cult people, up all night like vampires and bikers. The only difference between Lana and me is her haunting voice. That carries everything. The voice is the central axle around which the spokes of everything else extend.”