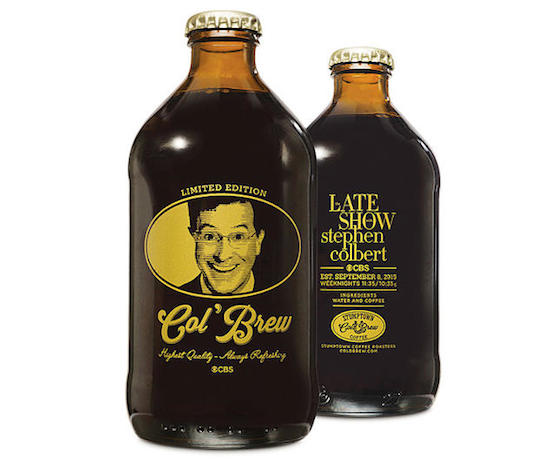 Stephen Colbert is putting his face on everything these days along with our television screens. His calming face will be gracing your coffee in the morning before you see him sign off your nights.

As part of promoting the premiere of The Late Show with Stephen Colbert on CBS, Stumptown Coffee Roasters has created a “Col’ Brew” version of their Cold Brew Coffee.

If you are in the city on September 8, street teams will be out and about in New York City handing them out, ahead of Colbert’s first episode that night.

No word yet on public availability of these bottles, so if you want one, you might have to just go to NYC for a vacation.

Don’t forget to check out the premiere of The Late Show with Stephen Colbert as he has an amazing set of guests lined up for his first week including George Clooney, Jeb Bush, Scarlett Johansson and Amy Schumer.