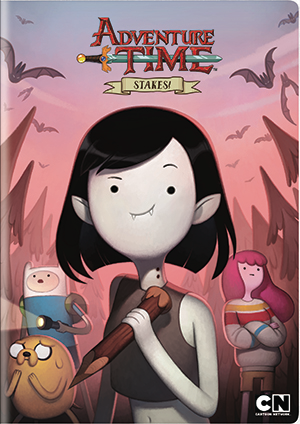 Our favorite “Adventure Time” adventurerers are back again for another episodic good time in “Adventure Time: Stakes!” This highly anticipated episodic special comes out on DVD January 19th. The release features 8 episodes, plus never-before-seen content.

Cartoon Network answers the burning questions about one of the Land of Ooo’s most mysterious residents, Marceline the Vampire Queen in the eight-episode special, “Adventure Time: Stakes!,” which will debut on DVD this January. A serialized journey into the diary of Marceline the Vampire Queen, “Stakes!” is the latest in a long line of must-sees from the prolific, Emmy® and Peabody Award-winning Adventure Time team.

Marceline wishes to be an undead, red-sucker no more, but can Princess Bubblegum concoct a cure? At the same time, five of Marceline’s most fearsome foes return from her past. What might her most powerful nemesis, the Vampire King, have in store? Finn, Jake, Princess Bubblegum and their friends join the Vampire Queen’s fight against her immortal enemies. But for Marceline, the stakes have never been higher throughout these eight special episodes of Adventure Time!

The DVD will include all eight episodes, plus exclusive new content including animatics, an art gallery, song demos and a brand new song written by Rebecca Sugar (Steven Universe).

“Stakes!” debuted on Cartoon Network in November 2015 to phenomenal success, ranking as the #1 program in its time period with all key kids and boys audiences. The DVD release joins the roster of Adventure Time home entertainment titles that includes seasons one through five packed with bonus content, as well as a collection of themed episodic releases, all of which are currently available at retail. Supported by a huge following that includes nearly 18 million Facebook fans, the brand boasts a strong lineup of consumer products that includes publishing, games, toys, apparel, comics, costumes, posters, and much more.