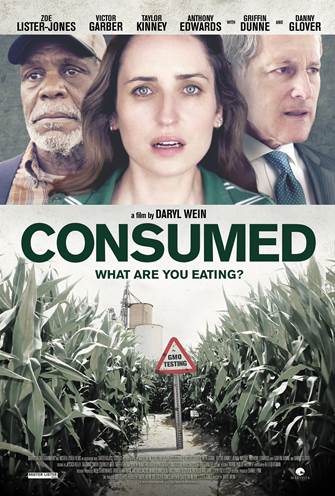 Consumed, the new film from filmmaker Daryl Wein (Breaking Upwards) is releasing today on digital HD and On Demand! This exciting and dramatic thriller explores the complex world of Genetically Modified Organisms (GMOs) while not being a documentary and remaining in a fictional landscape. It is brilliant.

Consumed follows a working-class, single mother (Zoe Lister-Jones) on a hunt to uncover the cause of her son’s mysterious illness. Interwoven are the stories of an Organic farmer, the CEO of a biotechnology corporation, and two Scientists on the verge of a major discovery.

Jones and Wein are actually the husband and wife team behind the film, as well as the award-winning indie dramas Breaking Upwards and Lola Versus. For each of their films together, they have developed the idea, wrote the script, and produced as a team.  Daryl directed each film, while Zoe works in front of the camera.

Consumed has been an eight year passion project for the duo who follow an organic, non-GMO diet of locally farmed produce and locally raised livestock. Originally from the East Coast, Zoe and Daryl now live in Los Feliz.