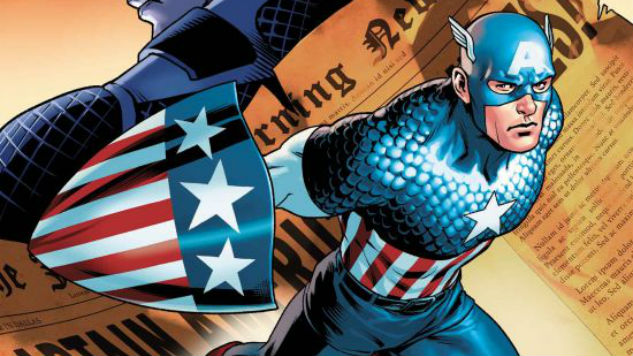 In case you haven’t seen the news or been around any super pissed off comic and Marvel fans, this week’s premiere issue  of Captain America: Steve Rogers released and boy did it ruffle a ton of feathers.

Captain American, beloved hero and epitome of well America, has been revealed to be a secret agent of Hydra. Blurgh.

Captain America has been one of the more consistent characters in the Marvel roster since the creation of the Marvel universe. His debut was in 1941 with Captain America Comics #1. Since then he has only had a brief hiatus for a decade following the waning interest at the close of World War II. However, we as a nation found him again in 1964 and since then Captain America has held strong. Steve Rogers and Cap have been in dozens of different iterations in the comic world most notably, though, in the Marvel Cinematic Universe, portrayed by Chris Evans.

Here’s the thing. The Captain America name has been synonymous with patriotic and American ideals ever since his inception as a supersoldier battling the evils of Axis Powers in the second World War. Almost every incarnation of his enemies somehow embody whatever anti-American values are bothering our nation at that moment such as Nazism, fascism, communism, anarchism and terrorism. His ongoing foes, Hydra, are an international and domestic terrorist organization bent on world domination through the installation of a fascist New World Order. They also are the complete opposite of SHIELD, the outfit that many Marvel heroes work for including Cap. Hydra has also been known to be Nazi when it first started gaining power during the introduction of the facisist outfit.

That takes us to the new comic release. In one of the closing panels of the comic, the hero (is he still our hero? We don’t rightfully know at this point) utters two words after a long drawn out battle with Baron Zemo: “Hail Hydra.” Two words that spring fear into words of all Marvel characters.

Unfortunately it appears that the patriotic super hero has been revealed to be a Hydra double agent all along. Can I say blurgh again? 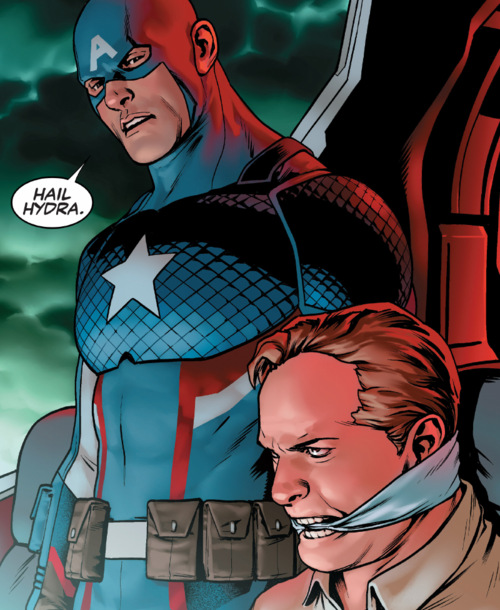 Marvel executive Tom Brevoort has confirmed that the character who declared his allegiance to Hydra is, in fact, the authentic Steve Rogers and not an impostor or a shape-shifting Skrull. Brevoort admitted:

We knew it would be like slapping people in the face. […] The idea of Captain America means something very primal and very strong to the people of this nation, and they have a very visceral reaction when you get to something like that. You want people to feel and react to your story. So far, so good.

And boy, people are pissed! Not just because the supersoldier they know to have been fighting Hydra since the 60’s has been bad along supposedly but because hey, did Marvel ever think of the repercussions of the fact that Steve Rogers/Cap was created by a Jewish writer and illustrator and that Hydra is associated and very openly Nazi? It’s a bit fucked up Marvel.

Brevoort has gone on to explain that, from the point of the revelation onward, Captain America’s mission is to further the mission and beliefs of Hydra. Fuck you Brevoort and Marvel.

Fans will just have to wait for more details until the second issue comes out on June 29. That is if they care to wait after this.

In this article:captain america, Marvel