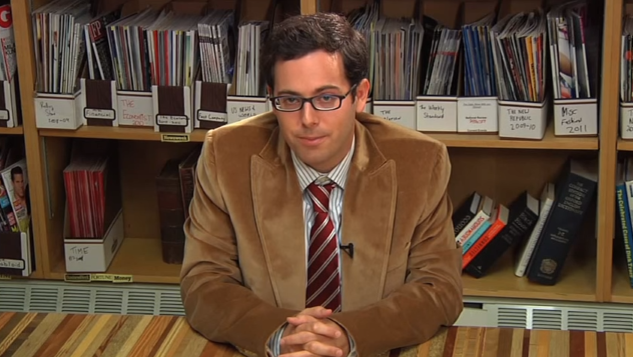 “Mystery Science Theater 3000” has officially chosen the head writer for the tv series reboot! The former head writer of The Daily Show during Jon Stewart’s tenure, Elliot Kalan, has been announced as the new head writer. The news was announced via an update for backers of the show’smassively successful 2015 Kickstarter drive and series creator Joel Hodgson.

Per the update on the Kickstarter:

Now, one thing I want to tell you: even though Elliott was also head writer at The Daily Show, it doesn’t mean that we’re planning to make MST3K more political. He’ll explain for himself, but one thing I like about Elliott is that he’s really “one of us.” Elliott has been a MSTie since he was a teenager, and even more importantly – at least to me – he’s really fun to write with.

Sounds good to us. Especially encouraging is the fact that cracking wise about bad movies is hardly new to Kalan either, as he’s already the co-host of an excellent bad movie podcast, The Flop House. Here’s the message he delivered in the update to MST3k fans.

I’m so honored and so thrilled to be working with Joel and Jonah and everyone else on Team MST3K. This has literally been my dream job since I was an adolescent. Other kids were sneaking out of the house to go drink beer in the park. I was sneaking into the basement to watch the midnight MST3K rerun on Comedy Central.

For roughly two decades I’ve rued the fact that I was too young and too not-in-Minnesota to work on this show. But now it’s finally happening! This is so exciting! All those hours reading and rereading the Amazing, Colossal Episode Guide are finally paying off!

It’s been a blast working so far, and while I can’t tell you what we’ve got planned I will sum up most of it in one word: silliness. Like, a lot of it. Which is a huge relief to me – after more than a decade of looking into our nation’s political system, it’s nice to only have to look at the worst movies we can find. Which is not to say these movies aren’t bad. They’re terrible. Just not as soul-crushing as, say, Congress.

Thank you so much to everyone who supported the Kickstarter and, as a happy side effect, made one of my lifelong dreams come true. You have no idea how much I appreciate it. All I can promise in return is that I will try to make this show even goofier than you thought was possible. To me, that is a solemn trust.

We still do not know when or how the reboot will air but the fact that it is even moving forward at all is super exciting!