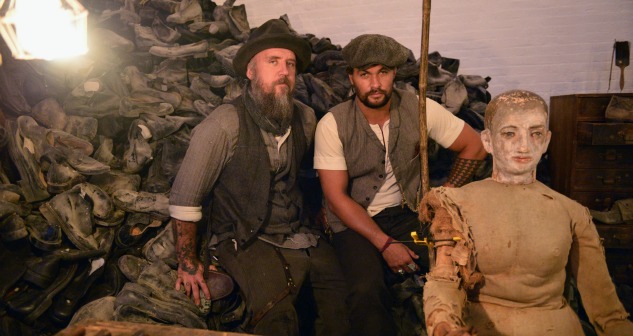 attend during the opening of Blaine Halvorson installation “Walk, Don’t Run” at NYFW: The Shows NYFW: The Shows HQ at Headquarters on September 11, 2015 in New York City.

“Game of Thrones” sex incarnate Jason Momoa has been cast in lead role for the upcoming Netflix Series “Frontier” according to a report from The Hollywood Reporter.

In the drama, which was created by Peter Blackie and Rob Blackie, Momoa stars as Declan Harp, a ruthless, brutish and ambitious trader who is full of charisma, but is driven by lust and revenge.

The story is told from multiple perspectives and will observe the violent struggle between businessmen during the 18th century North American fur trade and the chaotic conflicts that arise between Native tribes and Europeans.

Brad Peyton will direct and executive produce the series alongside Jeff Fierson, Alex Patrick and John Vatcher. The series will be produced by Take the Shot Production and Peyton and Fierson’s Factory Backwards, in association with Discovery, which will serve as the exclusive Canadian broadcaster, and Netflix.

Shooting for Frontier is set to begin this month in Newfoundland, Nova Scotia, Ontario and Cornwall in the U.K. Discovery will air the series in Canada in 2016. Netflix will begin streaming the series in 2018.

In this article:Frontier, Jason Momoa, Netflix