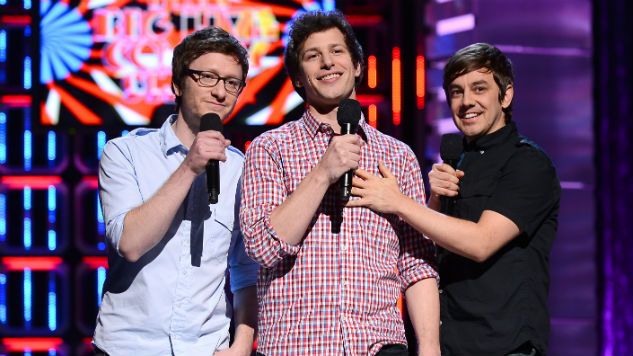 The musical comedy trio known as Lonely Island has signed on for their own comedy series according to a report from Variety. The group has given us such gems as “I’m on a Boat” and a beautiful number about pirates of the Caribbean with Michael Bolton.

The new series, titled “Party Over Here” will be executive produced by Andy Samberg, Akiva Schaffer and Jorma Taccone, Party Over Here will tackle everything from pop culture to politics, and feature comedy shorts alongside in-studio segments filmed in front of a live audience.

“When we first conceived this idea, we thought of it as a spinoff of Empire,” said The Lonely Island in a statement. “We failed miserably… now it’s much more of a sketch comedy show.”

Back in 2014, The Lonely Island signed a deal to develop potential Fox and FX comedies for digital platforms. This new production appears to be a direct result of that deal.

Nicole Byer (Girl Code), Jessica McKenna (Riot) and Alison Rich (Resident Advisors) are slated to star in the half-hour show, while Samberg, Schaffer, Taccone, Paul Scheer (The League) and Billy Rosenberg are serving as executive producers. One assumes they would also appear on screen at some point.

“The late-night landscape is wildly competitive, and we thought long and hard about the kind of audacious, attention-getting voices we needed,” said David Madden, President, Entertainment, Fox Broadcasting Company. “Andy, Akiva, Jorma, Paul and our three stars—Nicole, Jessica and Alison—are the ideal group of talent to do just that. They’re fearless, original and, of course, very, very funny.”

In this article:lonely island, party over here