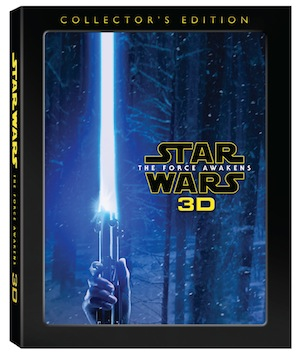 “Star Wars” fans can rejoice as Star Wars: The Force Awakens is about to realse in a special 3D Collector’s Edition! Experience a galaxy far, far away—up close and in eye-popping 3D – rolling out beginning Oct. 31 and arriving in the United States and Canada on Nov 15.

Star Wars: The Force Awakens saw the eagerly anticipated reteaming of original Star Wars stars Harrison Ford, Carrie Fisher, and Mark Hamill, along with Anthony Daniels, the only actor to have been in all seven Star Wars films, and Peter Mayhew. The returning cast was joined by Daisy Ridley, John Boyega, Adam Driver, and Oscar Isaac.

Just in time for your holiday shopping or even your own home movie collection, viewers can bring home Lucasfilm’s Star Wars: The Force Awakens in 3D, encased in stunning, collectible packaging.

* Digital bonus offerings may vary by retailer. New bonus content is available in the 3D Collector’s Edition package only.

In this article:Star Wars, Star Wars: The Force Awakens